A tale of two civilizations, or why there is hope

Last month, after the coronavirus-delayed Victory Parade in Moscow marking the 75th anniversary of the triumph over Nazi Germany, Russian President Vladimir Putin traveled to nearby Rzhev to unveil a new monument.
The 25-meter memorial pays homage to uncounted Soviet soldiers who perished in the Rzhev salient between 1941 and 1943, in bitter fighting described as a "meat grinder." The monument was reportedly entirely crowdfunded, designed by young architects, and depicts a soldier turning into a flock of cranes. 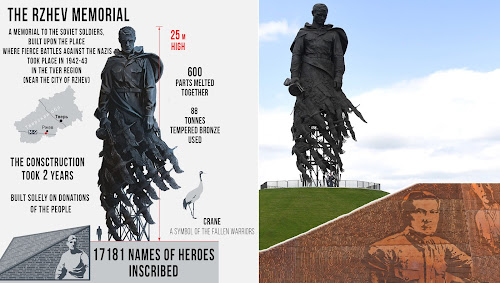 Cranes have a powerful symbolism in Soviet and Russian memory of WW2. A 1957 film about the suffering of civilians is named "The cranes are flying," and the flock of birds seen in the sky bookends the plot. A decade later, Dagestani poet Rasul Gamzatov will write "Cranes," a heart-rending poem about fallen soldiers turning into white cranes. It was set to music in 1969, and recorded by actor and singer Mark Bernes shortly before he died of cancer. Hence the cranes, you see.
Shortly before the Rzhev monument opened, Putin also unveiled the grand cathedral of the Russian Armed Forces, at the heart of a new WW2 museum outside Moscow.

It's interesting to observe the contrast between the West and Russia recently. As the West has been dismantling its monuments, Russia has been erecting massive Orthodox churches, like the new Armed Forces Cathedral, and WWII memorials, like the one of Rzhev, in this month alone. pic.twitter.com/jNyNqCIuBK

Meanwhile, the "greatest country in the world" that is fond of deriding Russia as a "gas station with missiles" is undergoing a Cultural Revolution-style purge of monuments, revision of history and destruction of memory.
It may have started with century-dead Confederate generals, but quickly escalated to Union generals, Catholic saints, Christopher Columbus, and even the founding fathers of the American republic. Absolutely nothing is sacred, and everything must be torn down in the name of intersectional social justice or something.

This is what a dying civilization looks like. https://t.co/HQeeixN68z

The irony is that, insofar as the monument-toppling revolutionaries have an articulated agenda beyond destruction, it's race-based Communism. Russia went through that starting a century ago, and though it took a while, it has obviously recovered rather well, as physical evidence shows. So, there is hope. Nothing is inevitable. One just has to be willing to learn from the mistakes of others, lest they be repeated.
Posted by CubuCoko at 11:25 No comments: