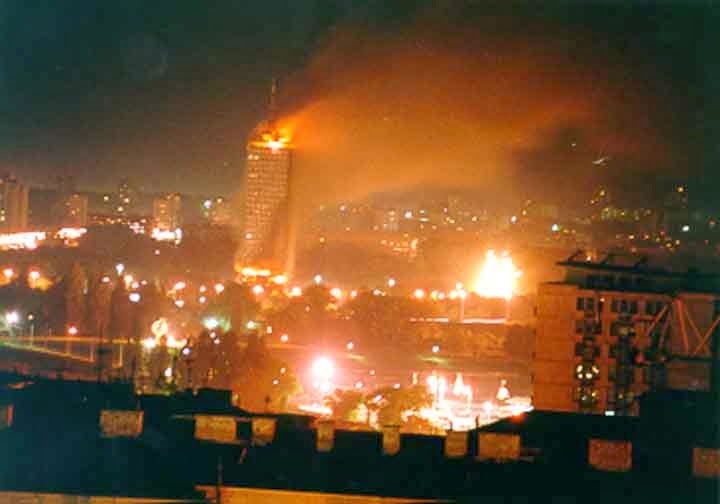 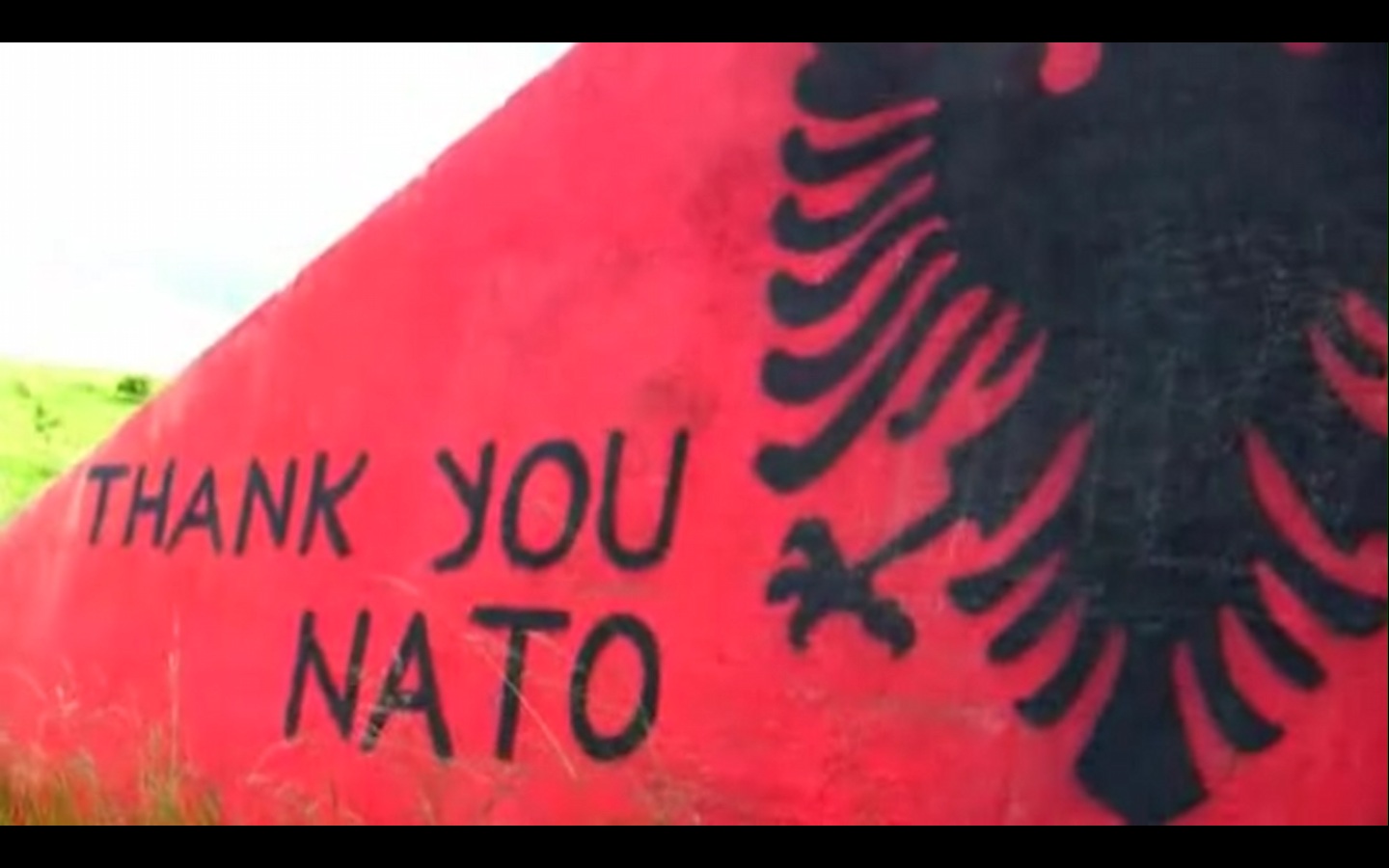 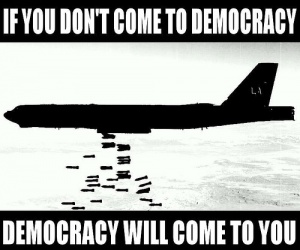 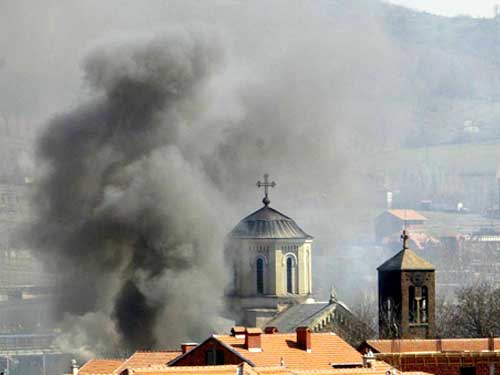 The East Remembers.
Posted by CubuCoko at 01:18 2 comments: 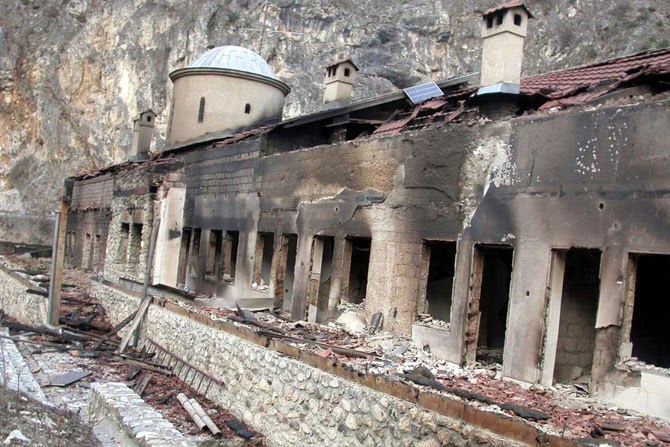 The East Remembers
Posted by CubuCoko at 10:22 No comments:

Why Empire Needs a Conquered Serbia

Back in the summer of 2011, when most of the Western public still believed in the big lie of the "Arab Spring" - which ended up producing chaos in Libya, civil war in Syria, and the ISIS "caliphate" - I mentioned a great little documentary about Empire's revolution business. The filmmakers brought up the role an ostensibly private, non-violent, civil society NGO played in a string of "color revolutions," from Serbia to North Africa. In doing so, they committed the two cardinal sins in the modern West: Noticing, and Remembering.
For you see, nobody is supposed to notice that "spontaneous peaceful activists" are in fact coached by an Empire-backed operation; that their slogans are always the same; that their graphics are always the same; and that, whatever their official claims may be, the outcome is always the same: self-destruction of the targeted society and state, often to the point of civil war. Nor is anyone supposed to remember seeing that same pattern anywhere else before.

After the October 2000 coup that replaced Slobodan Milosevic's government with a regime more or less loyal to the Empire (today, that loyalty is absolute), some of the "student activists" instrumental in duping the Serbian public became professional revolutionaries. They named their organization "CANVAS" - Center for Applied NonViolent Action and Strategies. In English. Please notice and remember that, it's important.

This morning I came across a Russian analysis of a suspicious explosion in Kharkov (reportedly involving one Aleksandar "Aca" Kazun, an Otpor/CANVAS operative), against the backdrop of a little-too-convenient murder of Boris Nemtsov. A marginal political figure polling in single digits while alive, once dead Nemtsov was made into a sacred martyr of the "progressive opposition."

Anyway, the analysis (seen here in the English translation) keeps talking about the "Serbian trail", the "Serbian organization," etc. when referring to CANVAS. I understand this might be shorthand. But if it isn't, if the authors genuinely believe that CANVAS is a Serbian outfit, then they are playing right into Empire's narrative.

To wit, as I pointed out in the 2011 article mentioned above:


Branding Otpor and CANVAS as Serbian is no accident. Few in the world would be inclined to suspect a Serb of working for the Empire, after everything that happened in the Balkans in the 1990s. Washington policymakers have just about admitted that American bombers flew over Belgrade because of "Yugoslavia’s resistance to the broader trends of political and economic reform," rather than any reports of atrocities, exaggerated or fabricated on demand.

Merely defeating and conquering Serbia would not do. The Serbs had to be turned into the Empire’s most dedicated servants: when even a people like that can be so thoroughly crushed, resistance to the Empire must surely be futile.

This is why CANVAS has to be presented as a "Serbian" organization, when it is really a rabidly anti-Serb one. This is why the 2008-2012 government in Serbia was installed as puppets of Washington - because the junior partner in it were the Socialists once led by Milosevic, and demonstrating them broken was proving Empire's point. And this is why the current government, led by the former Radicals (now cynically rebranded as "Progressives") has plumbed the depths of submission and sycophancy like no other.

I may be personally invested in seeing Serbia throw off the yoke, but that last paragraph I quoted earlier is why Serbia ought to matter to everyone else.
Posted by CubuCoko at 14:06 2 comments:

The Truth Points to Itself


"The Crown Prince of Abu Dhabi Mohammed bin Zayed al-Nahyan has been accused of acting as a proxy for the US and Israel in Eastern Europe while also attempting to exploit a loosely regulated Serbian arms market to distribute weapons across the Middle East.

Behind the huge investment lies the shadowy figure of exiled Palestinian strongman Mohammed Dahlan. He is said to be at the centre of a web facilitating communication between the UAE with American and Israeli intelligence figures while also aiding corrupt Emirati investments in Serbia that have lined the pockets of their political leaders."


"Ministry of Defence of Serbia announced that it will begin the sale of more than 480 tanks and howitzers, 220 armored vehicles, more than 20,000 rifles and pistols and a large quantity of ammunition and other equipment."


"Ukrainian President Petro Poroshenko announced the signing of a deal on military and technical cooperation with the United Arab Emirates on Tuesday, during his visit to the IDEX-2015 Arms Expo in Abu Dhabi.

The president told reporters that he had signed a 'very important memorandum about military and technical cooperation' with his UAE counterparts, without providing any more information on what the agreement will entail. The deal was struck between Ukrainian officials and UAE Crown Prince and Armed Forces Deputy Supreme Commander Sheikh Mohammed bin Zayed al-Nahyan."

(Points to the disclaimer) No comment.
Posted by CubuCoko at 01:12 2 comments:

You may have noticed I haven't posted much lately, even though there have been news.

The reason is very simple: in late February, I was hired by RT (formerly known as "Russia Today"). Many people have already assumed I worked for them, on account of my numerous appearances on shows, newscasts and such. However, as I've explained here before, all those appearances were pro bono, voluntary, free of any suggestion, guidance or coaching.

A position opened on RT's news team. I applied, and was accepted. And it is good.

I went on RT shows for the same reason I have maintained this blog, its Serbian cousin, and a column over at Antiwar.com: to tell the side of the story that has not only been ignored, but covered up, suppressed, demonized and denied. I think I've had some success in that regard. I have no intention of abandoning that effort.  However, going forward, some clarifications are required.

Nothing you read here, not a single word, represents RT's official or unofficial position in any way, shape, or form. What you see here has been, and will be, strictly my own, private opinion. Nobody is reviewing, approving or censoring it - except me.

That said, expect posting to be considerably less frequent. Partly because at least some of the issues I've been tackling here will be handled through work now (in the Op-Edge section, for example), and partly because work is now taking up the lion's share of my time and energy. When I do post, expect it to be observations, musings and speculation that don't quite belong in the newsroom.