A book by Croatian-American economist Jozo Tomasevic, tellingly titled "War and Revolution," has served as the authoritative work of "history" on the matters of Yugoslavia in WW2. Published in 1975, it remains the foundation for numerous pseudo-histories written since, with the aim of somehow proving that it was really the "greaterserbian bourgeois oppressors" (actual Communist phrase) to blame for wartime slaughter and the interwar "oppression" of other groups.

In present-day Serbia, the cult of Serbian collective guilt has dominated politics, culture and academia since the 2000 astroturf revolution. That explains why few, if any, challenges to Tomasevic's myth have been put forth. Until now.

Miloslav Samardzic, another economist who turned historian, has researched archives, interviewed eyewitnesses, and written over a dozen books about WW2, focusing on the royalist resistance (aka the "Chetniks"). He is also one of the authors of a documentary series about Yugoslavia in WW2, mentioned here before - which will be shown in Washington DC on April 19 (see here for more information).

Samardzic has recently written a two-part essay addressing the numerous problems in Tomasevic's work, too lengthy to reproduce here. I do, however, commend them to the attention of anyone interested in WW2 history of Yugoslavia:

If it were just the Communists distorting the history of the war, to justify their takeover in 1945, that would be one thing. Quite another is to see Communist-invented history championed (example) by heirs of Nazi collaborators in present-day Croatia, Montenegro and Bosnia. Baffling as that might appear at first, once you realize that the common thread of these "histories" is the shared hatred of Serbs, things will begin to click into place.
Posted by CubuCoko at 10:27 7 comments:

Truly He is Risen! 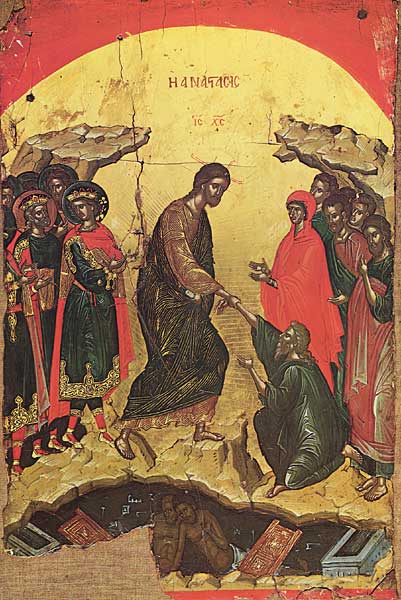 Just yesterday it would seem that the last hope for salvation had been lost, while today we have acquired firm expectation of eternal life ‘in the never-fading Kingdom of God.’ Just yesterday the ghost of corruption prevailed over creation, casting doubt over the meaning of our earthly life, while today we proclaim to each and all the great victory of Life over death.
[...]
Belief in Christ’s Resurrection is inextricably harnessed to the Church’s belief that the incarnate Son of God, in redeeming the human race and tearing asunder the fetters of sin and death, has granted to us genuine spiritual freedom and the joy of being united with our Maker. We are all in full measure communicants of this precious gift of the Saviour, we who have gathered on this radiant night in Orthodox churches to ‘enjoy the banquet of faith,’ as St. John Chrysostom puts it.
[...]
When spiritual heroism becomes the substance not only of the individual but of an entire people, when in striving for the celestial world the hearts of millions of people are united, ready to defend their homeland and vindicate lofty ideals and values, then truly amazing, wondrous things happen that at times cannot be explained from the perspective of formal logic. The nation acquires enormous spiritual strength which no disasters or enemies are capable of overcoming. The truth of these words is evidently attested by the Victory in the Great Patriotic War, achieved by the self-sacrificing heroism of our people. We shall mark the seventieth anniversary of this glorious date in the current year.

In afflictions and temptations we are called upon to preserve peace and courage, for we have been given the great and glorious promise of victory over evil. Can we be discouraged and despair? No! For we comprise the Church of Christ which, according to the Lord’s true word, cannot be overcome by the ‘gates of hell’ (Mt 16:18)...

(from the Paschal Message of Patriarch Kirill of Moscow and All Russia, 2015)
Posted by CubuCoko at 11:42 No comments: