Yesterday - not a month earlier - was the true anniversary of the "Great War" - July 28, the day when the Royal and Imperial government of Austria-Hungary declared war on Serbia. The declaration was preceded by an ultimatum designed to be rejected (weeks prior, in fact), and war followed despite Serbia's willingness to bend over backwards without compromising its sovereignty.

Austria-Hungary wanted Serbia wiped off the map, and its leaders thought this would be a quick and easy victory, and that Russia would either stay out of it, or be handled by Germany. None of that proved to be the case. Instead, Europe - and the world - plunged into unprecedented slaughter that would go on till 11/11 1918.

Gavrilo Princip - the student whose bullet struck Archduke Franz Ferdinand on June 28 - did not live to see the end of the war. He died in April 1918 in Terezin, a Czech fortress that would later be used by the Nazis as a way station for Jews destined for death camps. Deprived of books and paper, Princip reportedly scratched on the walls of his cell the following epigram: "Our shadows shall wander Vienna, haunting the court, frightening the lords."

A year and a half ago, Sara Hoyt argued that the present-day nihilism of the West can be traced to the trauma of the Great War:

... we've fallen into the rabbit hole of this sort of anti-hierarchy hierarchy, where greater power is given to those who claim (even while making d*mn sure no one unseats them) to want to “smash the establishment” and where greatest honor is given to those who hate their own culture and who glorify some mythical “other” who will never come close to their imagined greatness. Power is attained by claiming a wish to commit cultural suicide.And the sad thing is that some of these people actually mean it.

The story has come unmoored and is flapping in the wind, like a shroud. The specter of WWI is haunting western civilization. It’s time to lay the ghost to rest.

To the extent that the few in the West recognize and regret this, most fall into the trap of blaming the Orthodox Other - Serbia, but also Russia (!) - for allegedly starting it all. Because in this post-post-postmodernist mess that passes for "Western civilization" today, there are different kinds of Other: the mythical perfect Good ones (victims, martyrs, the oppressed, etc.) and the mythical perfectly Evil ones - the "oppressors", "enemies of progress" and "reactionaries", among other things. And who fits where isn't based on any semblance of logic, or reason, or facts, but on the current feelings of the person doing the sorting.

How did it come to this?

MH17 and Some Basic Police Work

The U.S. government and media have accused Russia of being behind the downing of Malaysian Airlines flight MH17 (July 17, 2014), either directly (for which zero evidence has been offered) or indirectly, via "pro-Russian rebels", for which all the evidence offered has been outright falsified - from "audio intercepts" (here) to "videos" (here and here) to interviews doctored to sound as if the "rebels" had Buk launchers. All of it taken at face value by the Western media, and even amplified by misrepresentations of photos.

Conspicuously absent from any coverage has been the thought of the Kiev junta shooting the airplane down. Yet the junta fits the classic police trifecta of means, motive and opportunity perfectly.

Means: the Ukrainian armed forces possess multiple Buk launchers in working order, over a dozen of which were deployed in the region at the time.

Motive: Blame Russia and the "rebels", which Kiev has been doing for months anyway, but especially at the moment when four of their brigades had just been cut to pieces by the "rebels" in the Marinovka/Saur-Mogila "cauldron" along the southern border.

Opportunity: MH17 was diverted from the regular flight path, and directed to a lower altitude, by the Dnepropetrovsk Air Traffic Control (ATC), i.e. officials loyal to the Kiev regime. Its normal flight path would have taken it nowhere near the war zone.

Then there was the immediate attempt to pin this on Russia and the rebels, through doctored "audio intercepts" and YouTube videos.

Yet the U.S. government continues to insist that Russia is to blame, based on super-double-secret "intelligence" it refuses to show, or "social media" - and deliberately ignores the factual evidence pointing to its clients in Kiev.

On July 3, 1988 the missile cruiser USS Vincennes shot down IranAir Flight 655 over the Persian Gulf, killing 290 civilians on board. When denial didn't work, Washington shrugged it off and apologized... not. 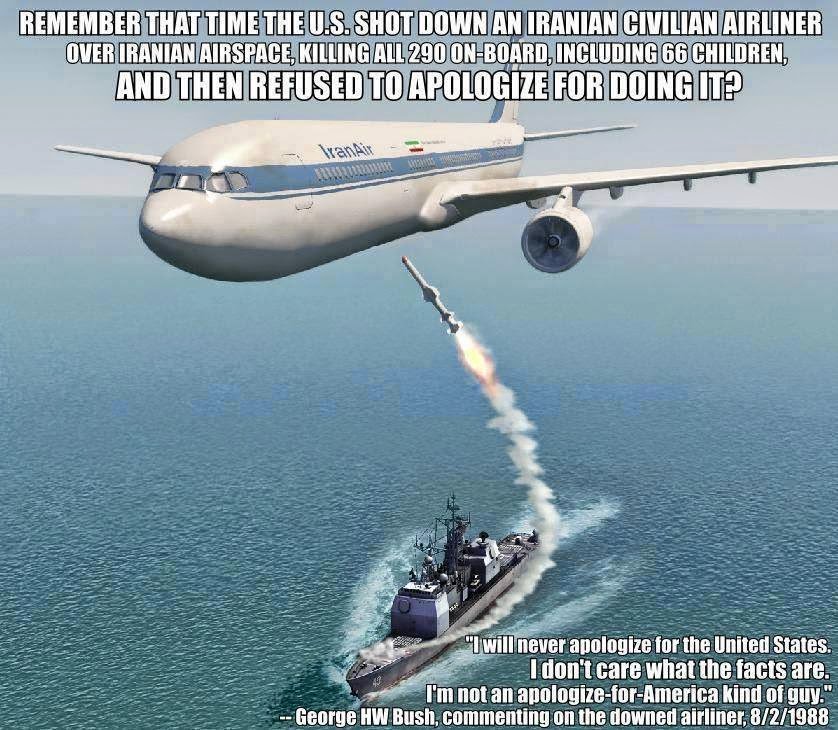 The question now is, who do you think is credible here, and who is lying through their nose?


Q: Well, I mean, again, you might be right, but I don’t see how you can say that everything we say is right and everything the Russians say is a lie.
A: That’s not what I said.
Q: That’s exactly what you just said right now.
A: That’s not what I said. I said I would say that we are not two credible, equally credible parties when it comes to what we say publicly about the conflict in Ukraine.
Q: And your argument would be that the U.S. is more credible than the Russians are, right? Is that what you’re –
A: I’m not even dignifying that question with a response.
Q: But you’re leaving that impression, Marie.
A: That we’re more credible? Yes. We don’t put out mass amounts of propaganda. We don’t put out misinformation about what’s happening there repeatedly over the course of this conflict, which I've spoken about from this podium day after day. Absolutely.

Who are you going to believe, Marie Harf, or your own lying eyes?

Where do they find these people? Barf, indeed.

The Serbian Orthodox Church has begun a campaign to rebuild Besenovo (Бешеново) monastery on Fruška Gora in northern Serbia, the 13th-century legacy of King Dragutin, destroyed in 1944. See here for the instructions on how you can help the rebuilding effort. And here is what the abbot of the monastery says about its remarkable history:

According to oral tradition, the Monastery was built by King Dragutin Nemanjić, who was the ruler of Srem. He placed the monastery on one of main springs that provided water for the old Syrmium, today’s Sremska Mitrovica. The cross of the Monastery of Bešenovo was mentioned already in 1292, that is, during Dragutin’s rule.

An Afghan in Donbass

Here is something one does not see every day: an Afghan Muslim, who came to Novorossia to fight for his Russian brethren. He talks of "whole family of tribes" fighting against the junta forces, who "know not what they do", and points to the Empire as the force that destroyed Afghanistan, and is now targeting the Russians:

Posted by CubuCoko at 13:28 No comments:

Of Geopolitics and Emotions

A video posted over at Vineyard of the Saker (and on YouTube) schools the "Runet patriots" - what we'd call "laptop bombardiers" in the U.S. - about geopolitics and emotions:


In other words, if you want war so much, go fight it. Howling on Twitter for Putin to "send in the troops" is not only counterproductive, but facetious to boot.

Posted by CubuCoko at 13:06 No comments:

Although Novak Djokovic won the title at Wimbledon yesterday, and with it the world number one ranking (which he had conceded last fall to Rafael Nadal), the crowd at Centre Court was rooting for his opponent. Today Max Davidson of the Daily Telegraph gushes over the "demi-god" Roger Federer "who deserves all the adulation he gets."

Why, exactly? Davidson himself is at a loss to explain, aside from the fact that Federer is "a paid-up fashionista" who hobnobs with the rich and snooty. As an example, he mentions that Federer flaunts his Wimbledon titles, wearing sneakers emblazoned with the number (seven), and had a pair with the number 8 ready. Such grace! Such humility!

On the other side of the court was Novak Djokovic. No gloating sneakers for him, or smarmy smiles. When Djokovic mingles with celebrities, they let their hair down and kick their shoes off.
He treats ball-boys as fellow human beings, not as staff:

Djokovic also loves his country and people, another unforgivable sin in the eyes of the transnational "elites":


"Novak Djokovic has donated his entire prize money for winning the Internazionali BNL d'Italia title in Rome to his foundation to help the flood relief efforts in Serbia.
Heavy rainfall in Bosnia and Serbia from 14-16 May has affected more than 1.6 million people, with at least 48 people dying as a result of the flooding."
(ATP, May 21 2014)

He... donated his winnings? How dare he!

But it gets worse. In what was called "a show of sportsmanship rarely seen at the professional level, especially at a crucial moment in one of sports' biggest events," earlier on during the tournament at Wimbledon, Djokovic conceded a critical point to his opponent. He literally gave Radek Stepanek a point that could have cost him the match and the tournament - because he wanted to win fair and square. And so he did.

All three are examples of what Djokovic's ancestors called "choistvo" - human decency towards the other.

The Telegraph's Davidson attributes the elitist snobs' adulation of Federer to the "charismatic genius of one man," yet notes in the very same sentence that the crowd was cheering just as much for Andy Murray last year. Murray may have been a Brit, but his opponent was Novak Djokovic.

I don't think the disrespect for Djokovic is entirely due to him being a Serb - a nation so demonized in the Western mainstream media, the vile bigotry has become the assumed background noise - though I imagine it certainly plays a part to some extent. More likely, the celebrity tranzis resent Djokovic's human decency, since it might raise the inconvenient question of their own conspicuous lack of it.

Much easier to gush over Federer's fancy footwear.
Posted by CubuCoko at 13:02 6 comments:

On this day in 1776, representatives of 13 American colonies declared independence from Britain, citing a "train of abuses and usurpations" starting with unjust taxation and getting worse from there.

I urge you to read the actual text of the Declaration; it's very instructive.

Thing is... the taxes that caused the colonies to rebel were nothing in comparison with what Americans pay today. The government in Washington treats its citizens worse than George III treated his subjects. And America's foreign policy is that of the British Empire: invade, divide and rule, lie and deceive, betray and corrupt - all the while claiming to be a force for good (then it was "civilization," now it's "democracy," in both cases stripped of all meaning).

And the worst thing? Most Americans either don't realize this... or if they do, they don't care. Today is for grilling, beer and fireworks - all fine things, mind you, of which I myself intend to partake. But while I do so, a part of my mind will continue to wonder: is this really what the Founders had in mind when they invoked "the protection of divine Providence" and pledged to each other "our Lives, our Fortunes and our sacred Honor"?
Posted by CubuCoko at 16:00 1 comment: