Lew Rockwell raises a valid question concerning the "trial" of Saddam Hussein: on what grounds, exactly, does one put a government on trial?

The essence of government is the right to obey a different set of laws from that which prevails in the rest of society. What we call the rule of law is really the rule of two laws: one for the state and one for everyone else.

So this raises many questions. Under what law should the heads of governments be tried? If they are tried according to everyday moral law, they would all be in big trouble. Did you plot to steal the property of millions of people in the name of "taxing" them? Oh sure! Did you send people to kill and be killed in an aggressive war? Thousands! Did you mislead people about your spending? Every day! Did you water down the value of the money stock by electronically printing new money that you passed out to your friends? Hey, it's called central banking!

Judged by this standard, all states are guilty. And all heads of state are guilty of criminal wrongdoing if we are using a normal, everyday kind of moral standard to judge them. Thus are they all vulnerable.

To be clear, I'm not talking about states in our age, or just particular gangster states. I'm speaking of all states in all times, since by definition the state is permitted to engage in activities that if pursued privately would be considered egregious and intolerable.

So on what basis can one state put another state on trial? Yes, some regimes are worse than other regimes, but who is to decide and on what grounds?

Rockwell isn't a moral relativist - quite the contrary. He isn't advocating letting the government off the hook, but rather arguing against the hypocrisy of one government putting another on trial. "Pot, meet kettle," and all that.

When people like me raised that issue concerning the NATO-sponsored ICTY putting Slobodan Milosevic on trial, we got slammed for "defending the monster Milosevic," as if his misdeeds (both real and imagined) were somehow an excuse for outright war crimes committed by Clinton, Albright, Clark, Solana and the rest of that particular "joint criminal enterprise." When Rockwell and others criticize the show trial of Saddam Hussein and the occupation of Iraq, they are "countered" by "arguments" that Saddam was evil. Evil enough to justify starting an aggressive war, murdering tens of thousands, occupying a country, unleashing a jihad...?

I don't think so, and I wonder how anyone, in good conscience, can.
Posted by CubuCoko at 11:20 No comments:

I don't suppose it will really matter if the 55.4% of votes supposedly giving Montenegro independence in this weekend's referendum are confirmed to be fair and square - the separatists have already declared victory, and the imperial media have already joined them in congratulations. I guess the world is safe, the global peril of Yugoslavia won't bother anyone any more.

Then again, even the New York Times notes that the "diaspora" from Brooklyn (i.e. Gusinje) may have been the deciding factor. It is buried down towards the bottom of the article, but it is there nonetheless. Something the NYT did not mention, however, is that while every pro-separatist "Montenegrin" was registered as a voter in the run-up to the referendum, tens of thousands who lived in Serbia were excluded from voting.

Three photographs came to me today (I have no idea who took them, when and where, so if anyone does, let me know). They show, beyond any doubt, that in addition to Serbs from Montenegro who backed secession for whatever reason, separatist voters were also Croats and Albanians. 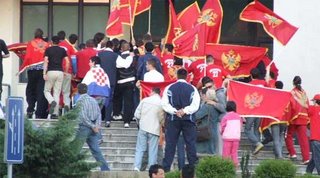 Separatists carrying new flags of Montenegro are joined by a supporter sporting the Croatian flag. 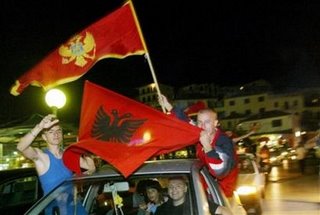 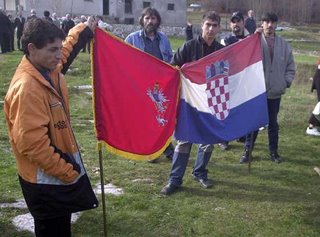 Croat and Montenegrin flags, tied together, at an outdoor pro-independence event. Bosnian Muslim SDA party and the Croat HDZ had tied their flags together like this back in 1991...

I've got nothing against Croats, or Albanians, or Muslims (I won't call them "Bosniaks," that's just silly). But there is something wrong with their votes deciding the fate of Serbs in Montenegro. You see, "Montenegrin," like "Bosnian," is a territorial identity; until it was invented by the Communists, there was no "Montenegrin nation." (See here.) However, in the separatist drive to split from Serbia over the past 8-9 years, they've tried to assert a different language, church, even a completely separate ethnogenesis from the Serbs. The government of Milo Djukanovic has done everything in its power to deny its people their Serb identity.

As former Communists who pragmatically switched allegiances to first become "nationalists," then vassals of the Empire, denying their own ethnic identity did not come hard - they never had it to begin with. And now they are in charge of Montenegro, including the 300-odd thousand people who consider themselves ethnic Serbs, and still remember that Njegos, King Nikola and all the other great Montenegrins in history shared that sentiment.

One can only hope that their character and faith will be strong enough to withstand the systematic de-Serbification the separatists are about to begin. If they keep the faith, then perhaps those misguided "Montenegrins" will realize the value of their scorned heritage once their new "independent" state is taken over by folks who'd like to see Albania extend to Dubrovnik, or Croatia to Skadar, or Bosnia to the sea...
Posted by CubuCoko at 03:48 No comments:

"We've already torched them all"

According to Belgrade daily Vecernje Novosti, Italian police released transcripts of wiretapped conversations between Albanian crime lords, boasting to each other of the "brave deeds" from the March 2004 pogrom:

Hazer: Why don't you ask your brother where he is?
Muharem: Why, you're in Mitrovica, right?
Hazer: No, I'm not in Mitrovica... We've torched all the churches in Prizren.
Muharem: Hell, torch them all!
Hazer: We've already torched them all, turn on the television so you can see them burning!
Muharem: I just turned it on.
Hazer: They're showing Prizren right now... All the church have been torched, not one is left.

Yes, obviously, such "humanitarian" acts and sentiments should absolutely be rewarded by an ethnically cleansed independent state.
Posted by CubuCoko at 16:15 No comments:

How much is truth worth?

I know Balkan Express has been on-and-off lately, but if you'd like to keep reading it, you may want to consider sending a contribution to Antiwar.com. Think about it - you fund Imperial propaganda every time you buy a mainstream newspaper. How much do you value the ability to read something different? Perhaps we don't know the true value of things till they are gone - but by then it is too late.

After the narrow defeat of the proposed constitutional amendments in the Bosnian legislature last week, the Social-democratic Party of Bosnia plastered the country with posters showing the "undertakers of European Bosnia" - the faces of 16 delegates whose votes defeated the proposal (see photo below).

Now to see whether the choice of these men and women will have any effect on their candidacies in the general elections this fall. If not, then perhaps Bosnians have the exact kind of government they deserve...
Posted by CubuCoko at 19:11 No comments:

The problem with being jaded is that few things surprise and outrage any more. For instance, when I saw what Dick Cheney said in Vilnius last week, I thought "How typical," rather than "Dear God, who does this man think he is!?"

But then, that's precisely what the advocates of Empire and its nefarious workings desire: that we should become weary and complacent - and always, always fearful of the world, from which only the Empire can protect us.

So I'm grateful Justin Raimondo is still capable of crying "bullshit" and letting slip the words of criticism. In his Friday column, "Comrade Cheney vs. President Putin : The Sovietization of American foreign policy," there's nothing I would not have written myself. And I should have.
Posted by CubuCoko at 11:41 No comments: