March 24, 1999 is a date that rightly lives in infamy. On that day, NATO launched an unprovoked war of naked aggression, violating its own charter and international law, while claiming to be on a "humanitarian" mission. 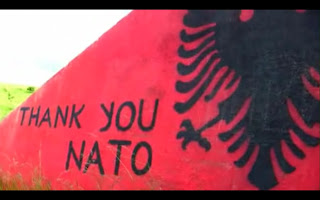 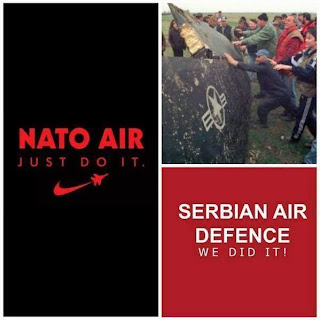 Thousands died in the war. Tens of thousands have died since, from cancers caused by depleted uranium dust. Most non-Albanians were ethnically cleansed from Kosovo, and the province turned over to warlords and organized crime. In 2008, the province illegally declared independence, which is not yet recognized by the UN.

Thanks to the shameless propaganda and spin, the Kosovo War is considered by most American politicians to be a great success and even a shining example of virtue in the "liberal world order" the US is upholding through its military might. Only one candidate in the 2016 election dared disagree with that conventional wisdom even a little; once elected, he ended up sticking with the inertia of US policy, delivering a pointless "normalization agreement" that did something Israel, a bit for the "personal project" of the Clintons, and nothing at all for the US. He was then replaced by an establishment warmonger.
Since the war, Serbia has served as the test bed for the first "color revolution" (October 5, 2000) and turned into a failed state ruled by a succession of servile slugs, each worse than the one before. The Atlantic Empire continued to enable Albanian aggression, in hopes of rekindling its romance with dar-al-Islam even as it bombed and invaded Iraq, Libya and Syria and fomented revolutions in Tunisia, Egypt and elsewhere that claimed even more Muslim lives.
Yet the Kosovo War served as a wake-up call for Russia, which had until then lionized the West even as it was being robbed blind and buried alive by Western "democratizers" and their domestic helpers. Within six months of NATO's land grab, Vladimir Putin was at the helm in the Kremlin. The rest, as they say, is history.

🔻#OTD in 1⃣9⃣9⃣9⃣ @NATO started bombing #Yugoslavia. For the first time since #WWII an aggression was committed against a sovereign European nation, an active participant in the anti-Hitler coalition, one of the @UN founders.
🔻https://t.co/EZqgWPmryq pic.twitter.com/fdPjy0eFz6


It is tempting to declare the saga of Kosovo over, 21 years after the war, as the quisling regime in Belgrade is busily recognizing the Albanian land grab. But the Atlantic Empire wouldn't be the first to write the Serbs off and declare them conquered and beaten, only to see them rise again.
Next year in Prizren. The East Remembers.
(If this sounds familiar, it's because you may have read an earlier version here)
Posted by CubuCoko at 13:25 No comments: