Former British PM, one of the Bombers of Belgrade and the butcher of Iraq, Anthony "Tony" Blair (or is it "Bliar"?) has actually visited the Empire's "puppet and lackey" in Serbia last June. Now he appears to have been officially hired as an "adviser" to what should be the Serbian government, but is in fact Empire's government in Serbia. Big difference.

Blair's speaking fees run into high six figures. A consulting retainer is probably much bigger. This isn't about money - though the systematically impoverished Serbia is plenty short thereof - but about principle, however. How self-hating, how spineless, how evil does one have to be, to cheerfully pay one's own aggressor and murderer?

John Bosnich and Višeslav Simić, both of whom I've had the privilege of meeting, explain the situation to RT's Anissa Nauai.

My new column about the Minsk truce and the rest of the conflict in the Ukraine is up on Antiwar.com this morning. It includes additional thoughts and considerations since my Thursday article here.

Antiwar.com is also having an emergency fundraiser, which I commend to your consideration. With the mainstream media basically an extended hand of the Empire, lying all day every day about everything, the American people are being merrily dragged to the slaughter at the altar of global empire. Twenty years after Bosnia, the same scenario is being used to demonize Russia, destroy Ukraine and control Europe. Meanwhile, America is drowning in debt, despair and deception.

Will the new ceasefire bring peace to Ukraine? I think not.

Reading through the points of the agreement reached this morning in Minsk, I am trying to figure out why it took a marathon, all-night session to essentially resurrect the September ceasefire. Aside from some slightly stronger language and specific timelines, to me this looks basically like the same paper. And the only part of "Minsk 1" ever implemented was the OSCE monitoring mission, which has been worse than useless.

Alexander Mercouris believes that the talks were a Franco-German effort to halt the fighting before the Kiev junta suffered a catastrophic defeat; that would have given Washington a pretext to send weapons to the junta, which in turn would have caused a Russian response - and WW3. Fair enough.
Here's a problem, though: as Andrew Korybko points out, Washington wasn't at the talks. While Mercouris thinks that Merkel and Hollande have kept the Atlantic Empire in the loop, this does not mean Washington is bound by the terms of the paper. Then again, the Empire has a history of oath-breaking, so that's a moot point.

It is important to note, as Mercouris has, that this is not a political settlement - not a peace treaty, then. At best, it's a ceasefire with theoretical potential to grow into an armistice. If Kiev abides by it, within a month we should see some steps towards a political settlement. But honestly, what are the odds of that?

In the first six weeks of 2015, some 50,000 Albanians have reportedly left the "independent state of Kosovo", setting off in buses across Serbia towards Hungary and the EU. Their number may be even higher: some "Kosovian" media mention up to 120,000 migrants. And now there is word they are also crossing over into Albania proper.

While the Western media reflexively blame the Serbs, nobody actually knows what is happening. Perhaps this account, from an ethnic Serb traveling from her enclave in Kosovo to Belgrade on a bus filled with Albanian migrants, may help shed some light on the phenomenon.

When I set out for Belgrade with a group of friends, early in the morning, and saw a group of Albanians at the bus depot in Gračanica, I realized the trip would take at least three hours more - but that this was also the opportunity to get to know these migrants better. 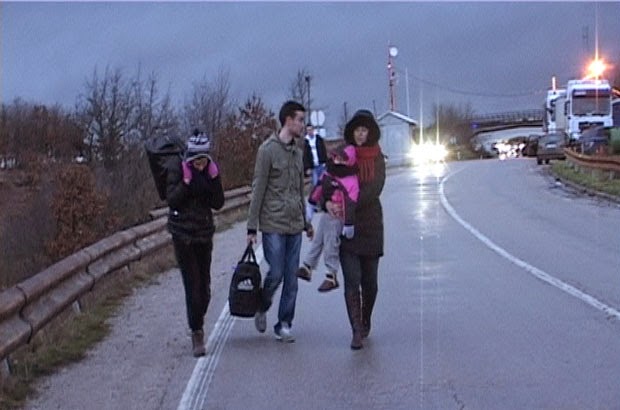 More Albanians boarded the bus at Ajvalija, Priština, Podujevo, all the way to Merdare. Most of them were young men, and young couples with children. When a few Serbs came on board at Miloševo we cheered up - until then, it seemed we were the only ones not traveling to Subotica.

They are leaving en masse, literally disappearing overnight. None of the Serbs know what's gotten into them all of a sudden. What I saw on the bus only confirmed the doubts that I and many other Kosovo-Metohija Serbs share: they are up to no good again. Apart from one woman headed to Subotica with her husband and children, who came on board in tears, everyone else looked entirely carefree. Neither her, nor her family looked like they were suffering, impoverished, or starving. Nor did anyone else. Few had more luggage than a single backpack, even those with children in tow. They were completely relaxed, laughing and talking on their phones, couples necking and kissing, as if they were all going to a seaside holiday and were about to burst into song.

On Friday, February 6, six Bosnian Muslims ("Bosnians", per the US media) living in Missouri, New York and Illinois were arrested on charges of aiding ISIS. The day before, police in Manchester (UK) raided 17 homes, targeting an Albanian drug-trafficking ring. Meanwhile, thousands of Albanians are leaving their "free, independent state of Kosovo" - carved out of Serbia for them by NATO in 1999, and declared independent in 2008. Nobody seems to know why - though that doesn't stop the Western media for blaming the Serbs.

Over in Bosnia - the place that set the precedent for America's "white knighting" in the 1990s - an entire village has been taken over by Wahabi jihadists flying ISIS flags. This is news all of a sudden; yet the village's Serb inhabitants were driven out 20 years ago, and it has been a jihadist commune ever since - and no one in the West gave a damn. "See no jihad" was the order of the day, even after 9/11. Why? Perhaps because of Washington's plan to earn the jihadists' gratitude - even though they've clearly showm what they thought of the idea, over and over again.

Last week, Russian agencies reported that "up to 200 mercenaries from the Balkans" were fighting for the Nazi junta in the Ukraine. According to the report, the US corporation formerly known as Blackwater recruited Croats and Albanians.
It wouldn't be the first time; when the tattered remnants of the German 6th Army surrendered at Stalingrad in February 1943, among them were troops of the Croatian Legion - a unit personally deployed to the Eastern Front by the Croatian Nazi leader Ante Pavelić, proud of his alliance with the "Thousand-Year Reich." Albanians also served Hitler faithfully, as he (and Mussolini) gave them today's Kosovo and western Macedonia, a Waffen-SS division, and a blank check to murder and expel as many Serbs as they could.

Fast-forward fifty years after the end of WW2. Pavelić's heirs again hitched their wagon to the strongest power, and used the status of its "junkyard dogs" to fulfill their iron dream. But the International Court of Justice just said you shouldn't worry your pretty little heads about that.

Trouble in Kosovo? Must be the Serbs' Fault

Something strange is going on in the "Independent state of Kosovia" these days - but only if you're a mainstream Western media reporter.

Voice of America is stumped by the fact that some ten thousand "Kosovianians" have fled for the EU since the beginning of the year. Their explanation? It's Serbia's fault (of course, always) for making it easy for the "Kosovistanis" to travel freely, which "coincided" with "political turmoil and street unrest in Kosovo fueled by poverty, high unemployment and economically debilitating corruption."

Now wait just a bloody, bombed-out minute. Aren't "poverty" and "high unemployment" trotted out every time to explain every riot in "Kosovia"? Remember the 2004 pogrom resulting in the expulsion of some 40,000 Serbs? Within days, the Albanians' Western apologists were spinning it as a natural consequence of unemployment, poverty, etc. Their proposed solution? Independence, independence, independence!
You see, at the time Kosovo was legally considered a province of Serbia, albeit under NATO and UN occupation since NATO's illegal war of 1999. After almost four years of pro-independence propaganda, in February 2008 the provisional government proclaimed the "Republic of Kosovo." Two years later, the International Court of Justice tortured logic into declaring that this wasn't necessarily illegal.

Fast-forward to 2015. "Kosovia" has been recognized by some 100 states, mostly vassals of the Atlantic Empire. Moreover, the quisling government in Serbia has de facto recognized the province's independence - government, flag, borders, customs, documents, etc. - and sold the remaining Serbs down the river, basically forcing them to participate in "Kosovarian" elections. Never mind that only a handful of Serbs vote, and that even fewer agree to be token symbols of "Kosovian" tolerance and multicultural democracy or whatnot. And there is still a problem?