Peace In Our Time

Some may say the Dayton Agreement was made to be broken; that it was a temporary patch on the gaping wound that was Bosnia, scheduled to hold it together past a US election cycle and then - back to the way it was. Others say it was meant to "evolve" into something else, some sort of postmodern, omnipotent managerial state the likes of which we're seeing implode all across the West today.

Yet somehow, it held. The Guns of April fell silent, the armies were disbanded, and even the "peacekeepers" that still drive around are a bare handful, there just for show and a hefty per diem. The "High Representatives" proved to be a joke, tin-pot viceroys attempting to play God - and failing. Forces that tore Bosnia apart before it even came into existence have continued to seethe, and the underlying problem shows no sign of being solved anytime soon. But the armistice has held for twenty years now. That's something.

Five years ago, I wrote a personal account of those days. This time, I made it a history lesson. Lest we forget.

I meant to post this earlier this week, but the War In Our Time got in the way. Sometimes I think it's the extension of the same one I went through, 20 years ago. We'll see what happens. I figured I'd post it today, though, on the day Americans celebrate as Thanksgiving, in honor of something I am thankful for. 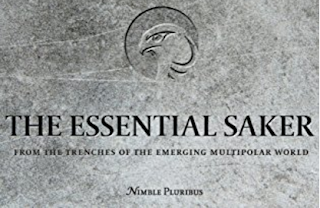 One of my long-time readers, the Saker soared into prominence last year following the Maidan putsch in Kiev, cutting through the smokescreen of lies about Russia and the Ukraine with his incisive analysis. He has not always been right, but he has been consistently straightforward about his opinions, and that's a rare quality in a blogger these days.

He has also accomplished something that I have only thought about doing, and collected his most important articles into a book. "The essential Saker: From the trenches of the emerging multipolar world" came out yesterday, on Kindle and in hardcover. I would go so far as to describe it as an essential resource for understanding the conflict between the Atlantic Empire and Russia.

I'll strive to post a proper review once I've read through the 600+ pages of the volume, but I confess to skipping ahead to the latter chapters, when he puts the events of Yugoslavia's demise into the context of Empire's war on dissenters. If the Saker's explanation of how the Empire has used Islam and Muslims as a weapon (always to their detriment) is the only thing you take away from the book, it will make a big difference in your understanding of the world today.
Posted by CubuCoko at 10:18 No comments: