I'm well aware that things won't magically change with the turning of a new calendar page, but we all like to pretend they will. Hope springs eternal, and all that. So in that spirit, I wish you all a happy 2010, a better year than the one behind us.

Happy new year!
Posted by CubuCoko at 13:03 No comments:

In today's Financial Times there was an unusual op-ed about the Empire and its protectorate otherwise known as Bosnia-Herzegovina. Signed by two authors and three co-authors, it is a call for renewed intervention by the "international community" in "broken" Bosnia, where everything they've fought for over the past two decades is (allegedly) endangered by the evil Serbs.

Everything here rings fake, from the concern for Bosnia's well-being to fears for EU and US credibility. Even the choice of who gets credited is calculated: since FT is a British paper, let's put the two Brits as the primary authors. The only authentic thing is the Serbophobia that permeates the piece. And the hypocrisy, of course.

Next to the undersigned Ashdown (ex-viceroy of Bosnia and disgraced politician at home) and Hague (Tory Shadow Foreign Secretary), the rest of the committee that put the piece together is American. There's Morton Abramowitz, founder of the ICG and the eminence grise of American foreign policy. Jim O'Brien was Madeleine Albright's right hand in the Balkans. And Jim Hopper used to head the Washington, DC office of ICG, as well as the rabidly interventionist Balkans Action Council prior to that.

Knowing where the authors are coming from, the content of the commentary is neither new nor surprising. Except for one thing - a clear articulation of their vision for Bosnia:

A robust international approach should focus on a single goal: a central government in Bosnia effective enough to meet the responsibilities of EU and Nato membership. Each Bosnian leader should have to stand for, or against, that simple idea – and face consequences for his or her answer.

Uhh, no. This was what caused the war, remember? And now they want to remake Bosnia to fit the vision of "Ein Land, Ein Volk, Ein Führer"? Do they also have the One Leader in mind? Pity that Alija Izetbegovic, "father of his nation" (as Ashdown wept at his funeral), has departed from this world. But Bosnia is not one land, nor is it inhabited by only one people, so it cannot have one government, no matter how much the authors of this op-ed wish it. Or their proteges in Bosnia itself.

Nothing else ought to be expected from people obsessed with safeguarding the political and other capital gained over the past two decades of their involvement in Blame the Serbs for Everything, LLC. However, their wishes remain just that - wishes. The Empire has no means to make them reality. The U.S. government debt is many times the GDP, while all its troops are either in Iraq, Af-Pak, or counseling after coming back from there. How dare they publish this in a financial publication, amidst the news of bankruptcies and the free-falling pound and dollar?

Ah, now I get it! It wasn't really a wish-list intended for the ailing Empire, but rather a letter to Santa Claus! But this is what happens when things are done in committee... Christmas was five days ago. Financial Times' op-ed page isn't quite the North Pole mailroom. And the "multiethnic, multicultural Bosnians" have outlawed Santa Claus anyway.

My Antiwar.com column last week dealt with the decision at the European Court of Human Rights that the Dayton Constitution discriminates against minorities in Bosnia, and I also had a live guest appearance on RT about the story as well.

Not surprisingly, I said the same thing in both venues: yes, the Constitution shortchanges Bosnians that do not belong to the three constituent communities - Serbs, Croats and Muslims ("Bosniaks"), and that obviously ought to be fixed. However, this should not be used as an excuse to tear down what little is left of the Dayton accords, because there exists no viable alternative to the 1995 armistice. The fundamental problem of Bosnia - the fact that its three main ethnic communities disagree whether the country should exist in the first place, let alone how it ought to be organized, and that there is little trust between them, if any - remains just as acute today as it was in April 1992 when it spiraled into bloody ethnic warfare.

This doesn't mean I endorse second-class citizen status for Jews, Roma, or anyone else. But there has to be a better way to ensure one's civil rights than playing into the hands of people like Haris Silajdzic, who hide their agenda of making everyone a second-class citizen behind the rhetoric of "citizen state" and multiethnic multiculturalism. One way or another, the three principal communities in the country have to agree to live together - or separately, if it comes to that - in a way that doesn't trample the rights of anyone, including minorities. If there's a better way to do so than Dayton, by all means let's hear it.

But the real problem for Jews in Bosnia isn't that Jakub Finci can't run for President. Once there was a vibrant Jewish community in Sarajevo. Then came the Independent State of Croatia, with its ideas about "Serbs, Jews, Gypsies and dogs" and support of the "community of European nations" led by Nazi Germany. The descendants of those that survived packed up and left when the civil war broke out in 1992, and never came back. Sarajevo is now over 90% Muslim. There's barely a handful of Jews left, so few that a rabbi has to fly in from Israel to hold services at major holidays.

Somehow I doubt that's the fault of the Dayton agreement.
Posted by CubuCoko at 10:49 5 comments:

Having more pressing and important business, I have paid little attention to the scandal over golfer celebrity Tiger Woods' adventures in blondeland. Suffice to say I was feeling somewhat sorry for the people involved, as their behavior would have hardly occasioned a reaction had it not involved a celebrity.

Until I saw a photo of alleged Tiger squeeze, Rachel Uchitel, in a National Enquirer article (spotted by one of Julia Gorin's readers), sporting atrocity headwear: 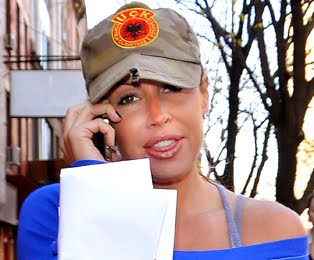 For the uninitiated, the emblem on the hat is the patch of the "Kosovo Liberation Army," the ethnic Albanian terrorist outfit that fought for "human rights and American values" by massacring Serb and Albanian civilians. Due to their usefulness to Washington's Balkans plans, they morphed from terrorists to "freedom fighters" within mere weeks, courtesy of PR agencies and a pliant press corps. In March 1999, NATO launched its first war of aggression on their behalf. When Serbia allowed NATO to occupy the Kosovo province, in June 1999, the KLA was allowed to run rampant - murdering and expelling people, pillaging and burning their possessions. Over the next eight years, it has "governed" the province, orchestrating a campaign of murder, destruction and intimidation aimed not only at the surviving non-Albanians, but at any Albanians who refused to submit. These paragons of tolerance, humanitarianism and democracy have also laid waste to some 150 Serbian Orthodox churches, chapels and monasteries, with nary a peep from Christians in the West.

But wait, there's more! Going by the same acronym was the "National Liberation Army" of Albanians in the country known by some as Macedonia. In the summer of 2001, this other KLA terrorized the Macedonian countryside until its Western sponsors could put enough pressure on the government in Skopje to surrender. Now they are guaranteed government jobs and subsidies.

Previously one could only find KLA "gear" among the ethnic Albanians in the U.S. (one of their strongest supporters - money, guns, volunteers and all). But Rachel Uchitel isn't Albanian, leastways not that I know of. I'm of the same mind here as Julia Gorin: if KLAwear has become the new street chick, joining other totalitarian brands like Che T-shirts, there ought be no more doubt whether their values are American; they clearly aren't the values of the America that exists on paper, that people still swear allegiance to, and fight for.

About the Imperial America, the one that goes forth to kill and conquer on behalf of terrorists, liars and philanderers... I'm not so sure.
Posted by CubuCoko at 15:49 4 comments: