Just as I was watching the ending of the Croatia-Turkey matchup at Euro 2008 (I won't give it away, but let's just say few saw that coming), this photo arrived in my inbox: 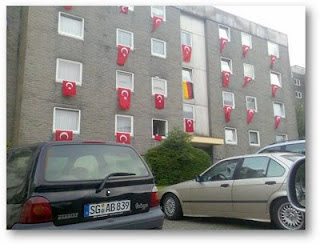 I don't know the source. I don't know where it was shot (though I presume somewhere in Germany, judging by the license plates) or when exactly. The caption was, "In Germany, support for their own."

As a commentary on immigration, integration and multi-culturalism in Europe, this picture is certainly worth a thousand words.
Posted by CubuCoko at 17:50 10 comments:

Kudos to the Irish

As they shoot down the EU Constitution crudely disguised as the "Lisbon Treaty."

After the original Constitution was staked through the heart by Dutch and French voters in 2005, the EUrocrats decided to get sneaky (after all, that's always worked far better than open collectivization), change some wording, stop calling it a Constitution and make it a "treaty" instead. This way, they figured, no referenda would be necessary and they could simply ratify it in parliaments.

Except the Irish law mandated a referendum. And that was a problem. Because, you see, the Irish had already told the EUSSR to shove it back in 2001, rejecting the Treaty of Nice. That was fixed by holding another referendum the following year; no doubt there would have been another yet, had the voters not "seen reason" and "made the right choice" (i.e. voted as their lords and masters in Brussels told them to). Still, the Irish had a history of being... difficult.

So this time, there was an enormous amount of pressure put on Ireland to shut the hell up and obey, from the EUrocracy and the commentariat alike (covered in a lot of detail by Brendan O'Neill). And the Irish still said "no."

Now, the naive might think the EUSSR will just melt away like the Wicked Witch when doused with water. No such luck. Too much power and Other People's Money is at stake for the EUrocrats to just give up. I'm guessing there will be enormous political, media and economic pressure on Ireland to annul the vote, or vote again (and again, and again, until the "right" result is achieved). Or the EUSSR might suspend Ireland's membership, thus enabling the "Treaty" to come into effect on schedule and unhindered. Laws and rules aren't going to stop the people who've already said that legal is whatever they decide is legal (e.g. the Kosovo declaration of "independence").

The Irish rejection, however, could encourage other EU countries to, um, re-evaluate their relationship with Brussels. Not likely, I know, but at least it keeps the EUrocrats from sleeping well at night. In this bleak world of deceit and violence, one should cherish any victory, no matter how small or temporary - while hoping, of course, and working so it becomes sweeping and permanent.

In 1983, Croatian director Lordan Zafranović made a harrowing documentary about Jasenovac, the biggest death camp operated by the 1941-1945 "Independent State of Croatia." The film, "Jasenovac: Blood and Ashes" was suppressed during the 1990s, following the rise of Tudjman's nationalist government. Zafranović himself was blacklisted and lived in exile in Prague.

The film has recently become available on YouTube, with English subtitles:

It can be downloaded for free in from here and as a free torrent here.

I mention this now not in service of modern politics, but to honor the courage and integrity of the filmmaker who told the story of this bloodiest chapter in Croatian history, and to cherish the memory of the innocent victims of Jasenovac and the regime that operated it. Such atrocities must not be allowed to happen again. Forgetting is also a crime.

May the memory of Jasenovac victims live forever.