It is tempting to cheer for the independence of Scotland strictly out of spite for all the ills the United Kingdom has visited upon the world over the past three centuries. But that's not really fair to the English, who are just as oppressed by the coterie in London as the Scots or for that matter the Welsh. 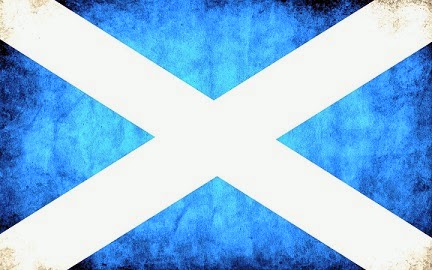 Why on Earth would anyone want to be ruled by people who allowed Rotherham to happen? Who created a culture of repression in which protecting children from sexual abuse became impossible out of fear of being labeled a "racist"? Who deliberately flooded the country with unassimilable immigrants to spite their own people?

From the very beginnings of human society, people have made an implicit bargain: they would tolerate government - be in in the form of tribal chieftan or faceless bureaucrats - in exchange for its promise of protection for their lives and property from enemies foreign (invaders) and domestic (thieves and murderers). Modern government has not only outright failed to deliver on its end of the bargain, but has actually become the biggest threat to lives and property of its subjects. Examples are a legion, from the depredations of Quisling Cult regimes installed by "color revolutions" from Serbia to Kyrgizstan, to the sex-slavery of Rotherham and the police violence in the United States of America.

So the question isn't so much whether the Scots ought to "throw off such Government, and to provide new Guards for their future security" (source), but why so many others have not done so - and what are they waiting for?
Posted by CubuCoko at 14:46 8 comments:

I chose not to write a special essay on the anniversary of 9/11. What would be the point?

I've said everything I've cared to say over the past thirteen years - how one cannot fight terrorism and support it at the same time, how there are no "good" terrorists just because they currently serve one's agenda, how it's madness to appease jihadists in hopes of earning their gratitude, etc. etc. Go through the posts tagged 9/11 if you wish, and see for yourselves whether the questions I've posed are not just as relevant today as a year ago, or five, or ten.

And I stand by my contention that there was never any war on terror(ism): the grand crusade was all about power. Don't believe me? Listen to the Emperor's speech declaring war on ISIS.

Proving that the brevity of Twitter can be the soul of wit, someone named "Stalingrad & Poorski" summarized the speech thus:


Justin Raimondo rightly called the speech a "dreary peroration exuding a skunk-like aura of insincerity" and correctly identifies it as a back-door attempt to effect "regime change" in Syria. Make no mistake, that is what "assistance to the Syrian opposition" really means. By the by, the mythical "Syrian opposition" is basically an adjunct of ISIS!

Jan Oberg dubbed the speech a "record low in terms of moral and intellectual analysis," and dwelt on the last two minutes of "everything is fine" (continuing the theme of protesting too much): "A combination of unbearable self-praise, slight megalomania and denial of the changing U.S. role in our changing world."

It's like watching the coyote from the old cartoons, chasing the road-runner bird over a chasm. Once he realizes he's running on air - but not a moment sooner - he immediately plummets to the ground. It now appears as if the Imperial government has convinced itself that so long as it pays no attention to the chasm, the law of gravity does not apply.

Newsflash: it does.
Posted by CubuCoko at 12:33 No comments:

The Emperor Doth Protest Too Much

His Most Elevated Majesty, Barack the Blessed, gave a speech in Talinn (Estonia) on Wednesday, filled with words such as "freedom" and "democracy" and "real progress" - whatever that means.

I'll deal with it in more detail in my Antiwar.com piece tomorrow (update: here's a link). For now, though, just some thoughts.
C-Span has the 30-minute video. The White House has a transcript.

Listen to it. Compare what he says to be the truth, with actual truth. Compare the actions of his own government, his own officials, his own troops - to his platitudes about "big bullying the small" and "dignity" and "independence". I dare you to listen with a straight face to his words about freedom of press and thought, what with Anglosphere media marching in absolute lockstep and every dissent dismissed as "propaganda."

Listen to his soothing platitudes about how NATO isn't aimed against anyone - the blood of Serbs, Iraqis, Afghans and Libyans begs to differ. Listen to his lies about how there were no Nazis in the Maidan, or how there was no coup in Kiev. "These are facts, provable, not subject to dispute" - except they are not.

And the "currents of history... flow towards freedom"? Who wrote this speech, Citizen Kang?

All this talk of the inevitable triumph of freedom, democracy, "real progress" (whatever that is) - methinks that's just His Imperial Majesty protesting too much. He is trying too hard to persuade his "allies" (i.e. clients) that he is still the most powerful, still the strongest, still the richest, that End of History is just around the corner.

Not everything in the speech was a lie. Moral strength is more powerful than tanks. People generally do wish to be free from bullying, and be independent. Might indeed does not make right.

So why is his country and his own government using tanks (or planes, or missiles)? Why does he bully other countries into making only the "choices" his government dictates, under threat of "kinetic military action" or "color revolution"? Why is it the core belief of the current government of the United States of America that might does make right?

He lies about motes in the eyes of others, while failing to see the beam in his own.
Posted by CubuCoko at 14:39 6 comments:

A Tale of Two Letters

Who would know better about the lies and fabrications of spies than people who used to be spies themselves? A group of ex-intelligence officials, called Veteran Intelligence Professionals for Sanity (VIPS), has spoken out against Imperial madness for some time now. On August 30, they sent an open letter to German Kanzlerin Angela Merkel, warning her about falsified claims of "Russian invasion". From the letter:


Obama, however, has only tenuous control over the policymakers in his administration – who, sadly, lack much sense of history, know little of war, and substitute anti-Russian invective for a policy.
[...]
Largely because of the growing prominence of, and apparent reliance on, intelligence we believe to be spurious, we think the possibility of hostilities escalating beyond the borders of Ukraine has increased significantly over the past several days.
[...]
Photos can be worth a thousand words; they can also deceive. We have considerable experience collecting, analyzing, and reporting on all kinds of satellite and other imagery, as well as other kinds of intelligence.  Suffice it to say that the images released by NATO on Aug. 28 provide a very flimsy basis on which to charge Russia with invading Ukraine. Sadly, they bear a strong resemblance to the images shown by Colin Powell at the UN on Feb. 5, 2003, that, likewise, proved nothing.
[...]
the government army that was starting to take heavy casualties and lose ground, largely because of ineptitude and poor leadership. Ten days later, as they became encircled and/or retreated, a ready-made excuse for this was to be found in the “Russian invasion.” That is precisely when the fuzzy photos were released by NATO and reporters like the New York Times’ Michael Gordon were set loose to spread the word that “the Russians are coming.” (Michael Gordon was one of the most egregious propagandists promoting the war on Iraq.)

One doesn't have to be an intelligence professional, of course, to realize the timing of the "invasion" propaganda was conspicuously coincidental with Kiev's crushing defeat. In resorting to such transparent lies, the Empire and its mainstream media betray a belief that their citizenry are idiots.

September 1, 2004: first day of school in Beslan, in the Russian Federation's Republic of North Ossetia. Hundreds of children, parents and teachers were trapped by Western-backed jihadists in Elementary School #1, stripped to their underwear, and held hostage for almost three days.

When Russian security forces attempted to rescue the hostages, the terrorists began the killing they had planned all along: 334 hostages were killed, including 186 children. Only one of the terrorists was captured alive; he is serving a life sentence in a Russian prison, unrepentant.

Beslan was the beginning of the end for jihadists in Chechnya. One by one, jihadists leaders were hunted down and killed: Shamil Basayev, who ordered the attack, died in an explosion in 2006. Today, Chechens under Ramzan Kadyrov are some of the most fiercely loyal Russian citizens.

But those who backed the Chechen jihad have neither been forgotten, nor forgiven.