Here's the New York Times, as mainstream as it gets:

“We sincerely regret that people were offended by this song,” the agency’s spokesman, Martin Nesirky, told reporters.

There are three quotes in the article written by Neil MacFarquhar. This is one of them, another is a mangled mis-translation of the lyrics, and the third is an excerpt from the statement by Vuk Jeremic, Serbia's ex-FM now chairing the General Assembly, which makes it sound as if he's proud of the alleged atrocities allegedly accompanied by the song.

MacFarquhar also calls the Battle of Cer "infamous". Okay, English is not my first language, so let me see if I understood that right. The Merriam-Webster dictionary defines the meaning of "infamous" as "having a reputation of the worst kind, notoriously evil". What?! The first Entente victory in the Great War, a triumph of the outnumbered, outgunned defenders turning back a cruel invader bent on eradicating them - that's "notoriously evil" and "having a reputation of the worst kind"? Who's editing the New York Times, Count Aerenthal?

Now, disregard for a second all the "editorial guidance" in the story, and focus on what the UN spokesman, Nesirky, actually said. "We sincerely regret that people were offended by this song." Not "The people who complained are absolutely right, this is a horrible atrocity," but a "Sorry you feel that way". It's not apology as much as an expression of sympathy. A diplomatic equivalent of a shrug.

Now look how the NYT, and the rest of the media, are choosing to ignore that fact and instead manage the perception: 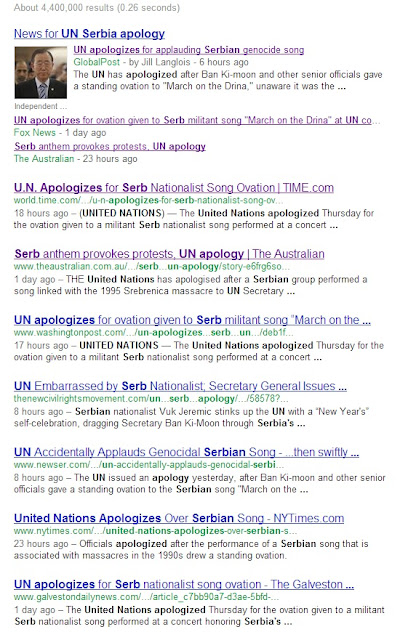 This is a screenshot of a Google search, using the phrase "UN Serbia apology", this evening around 7 PM. Look at all the terms appended to the perfectly neutral statement.

"Militant". Well, it is a military march, but you never see the adjective used to describe Sousa's "Stars and Stripes Forever," do you? And I'm sure the Vienna Philharmonic is routinely condemned as "militant" for playing the Radetzky March every New Year... What? It isn't?

"Nationalist"? What does that even mean?

The embellishments then go to the next level: "associated with massacres", "genocidal" (?!) "linked to the Srebrenica massacre" (?!) etc. Come again? Says who, the "Bosniak Congress"?  Is that where these "reporters" got their "facts"?

A couple of lazy journalists copy the loudmouths' handout, everyone else copies their notes - embellishing as they go along - and this is supposed to be journalism? Makes sense, I guess. Serbophobia is the only officially approved form of bigotry these days, after all.


I suppose an apology of my own is in order. I regret characterizing Nesirsky as a "spokesthing" and his organization as "spineless", having accepted at face value the mainstream media's misrepresentation of his statement. And as someone who has criticized the media for over a decade, I should have known better.

But if that can happen to me, imagine how people not disposed to mistrust the mainstream media will read the propaganda I've parsed above. Now that is truly infamous. In the dictionary sense of the word.

Curiously, the Vienna Philharmonic has performed not only the Radetzky March but "Mars na Drinu" as well:

I hate to give ideas to NYT, but if they ever come across this recording, they could write that the (now) infamous conductor Herbert von Karajan, a former member of the NSPD, proved beyond doubt that he always remained committed to Nazi ideals when he chose to conduct a Serbian genocidal anthem shortly before his death. I suppose the same could be said about the unrepentant Viennese public which reacted rather enthusiastically to music inspired by ethnic cleansing of their ancestors.

Suvorov, the said video is a joke. As in, someone dubbed the "Drina March" over the orchestra's traditional "Radetzky March" performance. I don't know who is behind it - perhaps a Serb with a quirky sense of humor - but it is, sadly, not true. Much as they bow and scrape to multiculturalism and the politics of guilt these days, the Austrians still retain some dignity (good for them).

funny to see how the well known media, exclusively from the "west", are all in on it. as if they were orchestrated.

Well, the search results speak for themselves. Considering the practically incestuous relationship between all the media, NGOs and governments in the West (or in occupied Serbia, for that matter), it is extremely unlikely they weren't in on it.

My fault, it seemed too surprising to be true, yet I believed the incredible in the end. I should have watched the video properly instead of simply listening to the tune. Well, I guess I won yesterday's MSM Gullibility Award.

Thank you for your correction.

Hey nebojsha, did you read the albanians saying that they want the same rights in Serbia as serbs have in kosovo after the terrorist KLA monument was removed?? Didn't that make you laugh? Are they saying they want to be sorounded by barbed wire and be shot at all the time by terrorists and the NATO occupation forces?

It would be great if we could take over managing the perception.Every computer in Serbia directing the google algorithm to headline "NYT dances to Mars na Drinu"

At least it would have brought tears to the whiny "Bosniaks" and the Western media.

David, it's both funny and spooky you said that, since that's precisely what they played in Sarajevo in June 2014, on the centenary of the Archduke's assassination...