Six years ago today, NATO attacked what was then Yugoslavia. Alliance leaders claimed all sorts of reasons and justifications for their act of aggression, from political extortion (initially) to "helping the refugees" (who just conveniently happened to be under the thumb of their allies, the terrorist KLA).

On May 14, 1999, Empress Hillary Clinton went to visit the Albanian refugees in Macedonia. BBC ran this picture with the article about the visit. 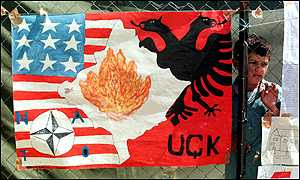 The shape in the middle is Kosovo. On the right side is the Albanian eagle. The "UCK" is the Albanian acronym of the KLA. Are further comments really necessary?
Posted by CubuCoko at 01:25