I haven't said a whole lot in this blog about my experience in Sarajevo during the 1992-95 Bosnian War. I intend to, eventually - at a time and in a manner of my choosing. Today, however, I was looking for some maps showing the boundaries of Albania in 1941, after the Nazi invasion resulted in what Albanian sympathizers term the "first liberation of Kosova" (sic); while searching, I stumbled upon this: 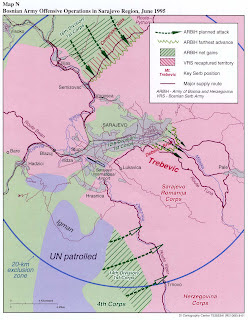 What is this? It is the map of the infamous 1995 "summer offensive" by the Muslim-dominated ARBiH that was supposed to break the siege of Sarajevo. Even those most casually acquainted in military arts can see that the direction of Muslim attacks makes little sense: only the 16th Division, attacking from the north, is actually moving towards the city, yet it eventually gets rolled back. Instead of attacking northwards from the city to help the 16th, the 12th Division is striking out eastwards, to... nowhere. And the 14th Division is attacking eastwards as well, to Mt. Treskavica (a barren piece of rock that claimed hundreds of Muslim lives without the Serbs so much as firing a shot). The whole operation was a strategic fiasco, with massive casualties.

Now for the reason I'm posting this. Notice the starting positions for the 14th Division's attack, down south. Two of the arrows start out not from green-shaded ARBIH-controlled area, but from the "UN patrolled" blue area. This was territory captured by the VRS (Bosnian Serb army) in a 1993 counterattack, which threatened to cut Sarajevo off completely from the rest of Muslim-held Bosnia. The Izetbegovic regime howled for help from the West; NATO and the U.S. threatened to bomb the Serbs; Serb leadership offered to cede the territory to the UN peacekeepers and keep it demilitarized. Of course, the moment the Serb troops withdrew, ARBiH forces poured in.

Oh, and did I mention that at this point Sarajevo was supposed to be a UN-designated "Safe area"? Yes, alongside Tuzla, Srebrenica, Zepa, Gorazde and Bihac, Sarajevo was supposed to be a demilitarized "safe haven" for civilians. There's even a 20-kilometer "exclusion zone" for heavy weapons, clearly seen on the CIA map. But see, "safe havens" were only sacrosanct when Serbs violated them; if Muslims deployed tens of thousands of troops, artillery and tanks within those areas, that was just fine.

The hypocrisy is just sickening.
Posted by CubuCoko at 13:42