The Bleiburg in Potocari 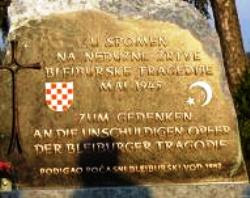 (The Bleiburg memorial, with the Ustasha and Muslim symbols, dedicated "In memory of the innocent victims of the Bleiburg tragedy, May 1945")

At the end of February, Al-Jazeera showed an interview with Bosnian Serb leader Radovan Karadžić, currently on trial before the ICTY in The Hague. It was done as part of a 40-minute report with Rageh Omaar. The report opened with the rows of green funeral shrouds, wailing Muslim women, and the rows of names on the Potočari monument, near Srebrenica. The images that follow suggest that the Serbs rounded up some eight thousand civilians, and shot them in broad daylight. This is what the Arab world thinks happened. It doesn't matter that it isn't true. This imaginary Srebrenica has become a symbol for the entire Bosnian War: evil Serbs, unprovoked and driven by hatred, killing innocent, unarmed, peaceful Muslims while the West watches the "genocide" and does nothing.

For years, the Western media took for granted the death toll of 250,000 people, mostly Muslims. A report by ICTY-commissioned demographers (Tabeau/Bijak) from 2003, indicating a death toll of 102,000, remained hidden for a year. Its accidental revelation in late 2004 caused a firestorm of denial and declarations that the final, official report, compiled by Mirsad Tokača, would establish the real number, closer to 150,000. That, however, did not happen. Tokača's report, completed in late 2005, put the final number of war dead at 97,000. And yet despite these constant revisions, even it maintained that the number of dead in Srebrenica was 8,000!

ICTY's own investigations suggest otherwise. Of the 7,661 persons listed as missing after Srebrenica was taken by the Bosnian Serbs in July 1995, some 5,371 are members of the Bosnian Army (ARBiH). Remains of 3,837 have been identified. Of those, 3,602 were men age 15-65, 201 were men aged 65 and over, 9 were boys under 14, 11 were women, and 14 of age and sex unknown. Tribunal investigators also found 448 blindfolds and 423 ligatures, indicating executions. They determined that "1,785 individuals died of gunshot wounds, 169 died of probable or possible gunshot wounds, 67 died of Shrapnel wounds or blast injuries, 11 died of gunshot and blast injuries, 6 died of other causes (trauma, suffocation, etc.), and 1441 died of undetermined causes."

So, the "eight thousand civilians" turn first into 5,300 military men, 3,800 identified bodies, 1800 gunshot victims, and 450 executed. Keep in mind that the women and children abandoned by the "brave fighters" of the 28th Bosnian Army Division (from the "demilitarized safe area" no less) at the UN base in Potočari were safely evacuated by Bosnian Serb troops, using trucks and buses hastily requisitioned from Serb civilians. What kind of "genocide" leaves the women and children alive?

There are more problems with the mainstream narrative. Some 3,000 names from the list of the missing are shown as having voted in the 1996 elections. Either they were alive, or there was massive electoral fraud. Either way, someone lied. Serb researched Milivoje Ivanišević(”Srebrenica ID Card”) accuses the Sarajevo government of burying people who died long before the war, as well as soldiers who died prior to July 1995, at the Potočari memorial cemetery. Bulgarian researcher Germinal Civikov questions the testimony of Dražen Erdemović, the "crown witness" of the ICTY prosecution whose accounts were used in every Srebrenica-related case. In his book, Civikov shows that Erdemović and his confederates could not have possibly killed 1,200 people in one night, as he claimed. Sure enough, only 127 bodies were found at the location.

Gen. Krstić, the first Serb officer convicted as "accessory to genocide" was nowhere near Srebrenica, having taken command on July 20, 1995 (five days after the town was taken). Momir Nikolić, another valuable witness for the prosecution, admitted to perjury - but his testimonies were kept! And the ICTY itself admitted that the actual facts of the case remain unknown, but the judges nonetheless believe some 8,000 men were killed. In a true court of law, it doesn't matter what one believes - only what one can prove. And there is simply no proof for the "genocide" in Srebrenica, because it did not happen.

In the summer of 1992, British reporters took a photo of an emaciated Muslim man and arranged it so it appeared behind barbed wire, like an inmate of Nazi death camps. Western media howled about "Belsen '92" and spoke of the Serbs as the new Nazis. A magazine that ran an analysis of the deception in Trnopolje was forced into bankruptcy by British libel laws, yet the truth of the analysis was never actually disputed. Deemed libelous was only the insinuation that the crew shot the photo with malicious intent. Because fabricating genocide photos is proof positive of humanitarianism, what? Anyway, the truth was out and the story of "Serb death camps" has mostly disappeared since. It was replaced by the constant invocation of Srebrenica as the "greatest atrocity in Europe since Hitler."

A massive memorial complex was built in Potočari, at the former UN peacekeeper compound where those women and children sought - and found! - refuge. Bill Clinton, that paragon of honesty and virtue, attended the grand opening. While the Bosnian Muslims are broke and without jobs, their government spent lavishly on the Potočari shrine. So that "vengeance could become justice", as the dedication in Arabic says. So that a lie could become true.

At the end of WW2, during the withdrawal from Yugoslavia before the advancing Communist troops, a number of Croat fascists (Ustasha) were captured in northern Slovenia and southern Austria. The British also turned over several thousand POWs to the Communists. The Communists shot a number of them at the town of Bleiburg, the same way they executed tens of thousands of "class enemies" in Serbia and elsewhere, since 1944. However, after the war, Bleiburg was turned into a shrine by the surviving Ustasha and the Catholic Church. Modern Croatian history claims that 60,000 people were killed in Bleiburg (!). British historian D.B. MacDonald explains:

Inflating the numbers of dead at Bleiburg had several layers of significance. Firstly, it gave the Croats their own massacre at the hands of Serbs and/or Communists, which allowed them to counter the Serbs' Jasenovac genocide with one of their own. Secondly, it allowed Croats to distance themselves from the Serbs and the Communist regime that had carried out the massacres. They could portray Croatia as an unwilling participant in the SFRY, more a prisoner than a constituent nation. Thirdly, by suffering such a massacre, the Croats underwent their own 'way of Cross', as it was frequently dubbed in Croatian writings.

While inflating the number of dead in Bleiburg, the new Croatian government reduced the number of victims of Jasenovac, to establish the moral equivalence of the Ustasha and the "Serbo-Communists" (led by Tito, a Croat...), going so far as to declare the Ustasha the real victims, claiming that Jasenovac was a work camp in which the Jews killed each other and there were hardly any Serbs there anyway...

Even President Mesić, hardly a Serbophile, called Bleiburg an Ustasha festival at government expense. He also added that those buried at Jasenovac were innocents, while many of those buried at Bleiburg were their executioners. It didn't change a thing.

Just as the Ustasha created a shrine in Bleiburg to cast themselves as victims (committing a horrific blasphemy by comparing themselves to Jesus), the shrine to the false genocide in Potočari serves to mask an aggressive ideology - whose insistence on a Muslim-dominated, centralized Bosnian state led to the war in the first place - with a halo of victimhood. Mustafa Cerić, the Bosnian Muslim religious leader, even put this "genocide" on the same level as the Holocaust at an interfaith conference last year.

The Bleiburg in Potočari is a symbol of the Bosnian War, though not in the way its creators intended. It is a fitting representation of a war steeped in manipulation and lies - an insult not only to the victims of Hitler's "final solution," but to reason and decency as well.
Posted by CubuCoko at 12:00

Already the professional victims and "genocide" peddlers are sending in their comments. One of them calls this a "tissue of foul lies" before launching into some rather crass language. As "proof" of this he (or she?) says that the checkerboard symbol on the monument is the Croatian national emblem, rather than an Ustasha one.

Wrong. As one Croat reader pointed out many years ago, the Ustasha checkerboard began with a white square, to symbolize the Croats' "racial purity." The current national checkerboard on the Croatian flag and elsewhere begins with a red square. So yes, this is an Ustasha symbol. And the Islamic crescent next to it isn't inherently Nazi, of course - but it does show that Muslims (or "Croats of Islamic faith" as they were called then) were among the Ustasha, including those killed in Bleiburg.

If only mainstream media actually checked
Their facts instead of listening to all
The PR propoganda, this unfortuante war
Would have been solved much quicker

Agreed, since the context is "Ustashi", however, it was the same in the Kingdom of Yugoslavia: http://www.babamim.com/yahoo_site_admin/assets/images/50_dinars.164130300_std.JPG

A first glance at that coin does suggest that the Croat quarter of the emblem indeed begins with a white field.

But a closer look indicates that the coin was reverse-struck, i.e. that the traditionally white or golden elements appear elevated and dark, while the colored elements are recessed and lighter.

this article is SPOT ON!