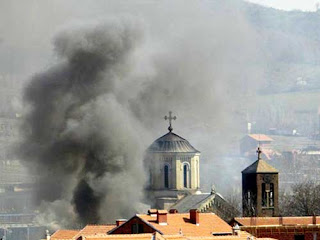 On this day, seven years ago, Albanian mobs launched a pogrom throughout the occupied Serbian province of Kosovo - torching villages, destroying churches, and expelling tens of thousands of Serbs who had remained in the province following the NATO occupation in June 1999. With a few notable exceptions - the Czech contingent comes to mind - the NATO "peacekeepers" acted shamefully. Those that did not hide in their compounds "helped" by evacuating the Serbs from their villages, which were left to the Albanians for the torching.

Even as the pogrom raged, the Albanians' sponsors in Washington began a propaganda offensive in favor of making the occupied province an independent Albanian state. They created one four years later, after installing a pliant government in Belgrade, and even tortured language, logic and law to make it seem legitimate. When the Serbs were - falsely - accused of atrocities in Kosovo in 1999, NATO violated international law to intervene and occupy the province. When Albanians committed real atrocities, under NATO protection, in 2004 - they got rewarded with a state of their own.

Today, the UN Security Council authorized external involvement in the Libyan civil war - on the side of the anti-government rebels. Meanwhile, in Bahrain, the government has brought in foreign troops, banned all assembly, arrested all opposition leaders, and gunned down unarmed demonstrators demanding basic human rights. But Bahrain is a 5th Fleet base, and its government (as well as the Saudis who are doing the intervening) is an "ally". Once again, some people are more equal than others, and some atrocities are perfectly acceptable when done by "our friends."

Whatever moral high ground the Empire has claimed over the years, it is long gone. Only force from on high remains, and the rank stench of hypocrisy and murder.
Posted by CubuCoko at 22:56

It’s a case of "here we go again" I can’t believe the west is walking into yet another 'intervention' the only difference this time the French are leading the way, eagerly destroying the weapons they had previously sold Gaddafi.

Aha, the French!
Charles de Gaule wrote something like: "all my life I have thought of France in a certain way."
So did/do the Serbs.
They are still addicted to the myth of the Franco-Serbian friendship.

In early stages of dismantling Yugoslavia the French were very vocal Serbophobes. I wrote at a time that dismantling the monument in Belgrade, dedicated to France, would be a good way to start dealing in truth. The Serbs almost lynched me.

I fail to see what historical basis there is for believing that the French are so much better than the British or the Americans.
After all the French were the masters of the North Africa. Hence it is only natural that they would lead the charge.

It is doubly ironic that the monument to France was erected after WW1, in gratitude for rescue of Serbs who survived the Albanian Crossing. Yet it was the Russian tsar who ought to be given credit for the rescue, because without his intervention the British and the French would have let the Serbs starve.

The truth of the matter is that Serbia has always been a wrinkle in both the British and the French plans for the Orient (as well as German and Austrian, mind you).

While some British and French soldiers admired the Serbs (from fighting alongside them), their general populations and governments couldn't care less - and acted accordingly. I'd like to think that the 1990s cured the Serbs of the vestigial Romantic notion of friendship between nations.

Guy Debord summed up the situation decades ago:

"The most fundamental issue in this war, for which so many fallacious explanations have been given, is that it is no longer a struggle between conservatism and change; it is a struggle over which kind of change it will be. We, more than anyone else, were the people of change in a changing time. The owners of society, in order to maintain their position, were obliged to strive for a change that was the opposite of ours. We wanted to rebuild everything and so did they, but in diametrically opposed directions. What they have done is a sufficient negative demonstration of the nature of our own project. Their immense works have led them to nothing but this corruption. Their hatred of the dialectic has brought them to this cesspit.

We had to destroy (and we had good weapons for doing this) any illusion of dialogue between these antagonistic perspectives. Then the facts would speak for themselves. They have.

It has become ungovernable, this wasteland where new sufferings are disguised with the name of former pleasures and where people are so afraid. They turn in the night, consumed by fire. They wake up in alarm and gropingly search for life. And word is getting around that those who have been expropriating that life have ended up losing it themselves.

This civilization is on fire; the whole thing is capsizing and sinking. What splendid torpedoing!"

This new war is just the same old barbaric American and European predatory Capitalist Neo-Colonialism in progress. The pretext that it has something to do with fighting a tyrant, or promoting "democracy", or protecting "civilians" is absurd on its face.

It is partly oil, of course, and also overturning a Socialist regime that had the audacity to share with the people in the form of National Health Care and free Education, and so forth.

It is also, more subtly, about strategic domination of the Mediterranean by the US and NATO (as well as Israel, the silent partner in all this as in the Balkans and Iraq.

Putin is also quite right about the the aspect of a "Crusade", and Medvedev and whoever else among Russian Federation leaders did not see the Balkans or Iraq in the UN Security Council Resolution should be immediately impeached, whether for pure incompetence or much worse.

But that is the business of the Russian people to resolve, no one else.

As far as the United States is concerned, Obama, who had already earned a claim to "war criminal" with his drones in Pakistan, now steps into the Big League, with the Bushes, Clinton, Johnson and Nixon, and with the added glory of being the first to begin a "Nobel Peace Prize War".

To that criminal line-up also add Cameron and Sarkozy, and of course earlier Blair.

They repeat the same tired and transparent formula over and over even as near final bankruptcy and collapse.