Nils Daniel Carl Bildt is currently the Foreign Minister of Sweden, and a longtime operative for the Transnational Progressivist establishment (e.g. the first Viceroy of Bosnia). He is also on Twitter.

Last week, some online outlets in Serbia reported that Bildt had tweeted: "the biggest mistake of the modern Russian government and Vladimir Putin was the return to Orthodoxy, which is worse than the Islamic terrorism that appears in the east."

Now, anyone even remotely acquainted with Twitter would have realized this could not have been accurate - not because Bildt doesn't dislike Russia or Orthodoxy (more on that in a second), but because the alleged statement is too long for a 140-character tweet. Moreover, a proper Tranzi like Bildt would have never used the phrase "Islamic terrorism" or referred to Islam in anything but properly submissive terms. Especially in Sweden, which has just about criminalized criticism of Islam. But the legacy media - controlled by foreign interests or the puppet government - did not bother to mention any of this, while the blogosphere took 'Bildt's" words and ran with them, because the made-up quote fit in with his other views on Russia and the EU/US policy in the Ukrainian meltdown.

The end result was B92, a pro-Empire news outlet, gleefully reporting a bishop quoting Bildt's alleged statement as accurate - and giving the Swedish minister a perfect excuse to argue - correctly - that "This quote from me is a complete fake. Propaganda from somewhere." (May 14 tweet)

And here is what he actually tweeted, back on March 24: 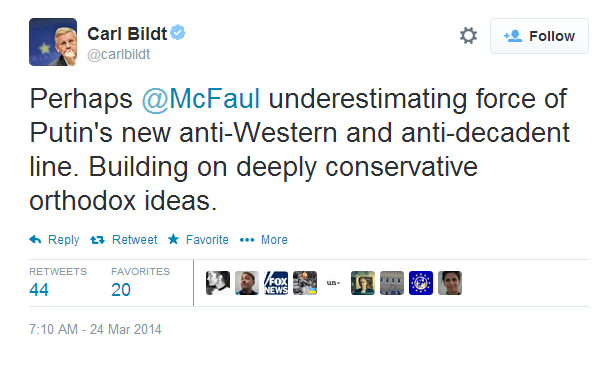 As you can see, he didn't mention Islam at all, but rather chided the former Imperial ambassador to Moscow (McFaul) for not realizing the seriousness of Vladimir Putin. Keep in mind, however, that in progressive-speak, "deeply conservative orthodox [sic] ideas" is pretty much the worst form of feelbad crimethink imaginable. From his other tweets and public statements, it is abundantly clear that he stands against everything Vladimir Putin stands for.

Yes, he really is blaming the victims - the peaceful demonstrators whom the "democratic democrats" of the Right Sector forced into the Trade Union building, then set it ablaze.

So the question now is, who embellished Bildt's March 24 tweet, and why? Was it a zealous amateur, seeking to whip up outrage - or a clever propagandist, trying to "Hanks" Bildt's words to con his opponents into citing fabrications as fact?

Either way, one always needs to fact-check, especially when statements sound a bit too good to be true. Truth does not need embellishment; lies do. And that is how you recognize them.
Posted by CubuCoko at 08:00