Here's an excerpt from my March 19 interview with the Voice of Russia radio (full transcript here):


Of all the legacies of communism that the West had denounced, the borders drawn up by the commissars, whether Stalin in the Soviet Union or Khrushchev, or Tito in Yugoslavia, they are the only thing that the West has been defending. Why?

I was also a guest on today's edition of CrossTalk, with Sir Michael Arthur in London and Jacques Cheminade in Paris. 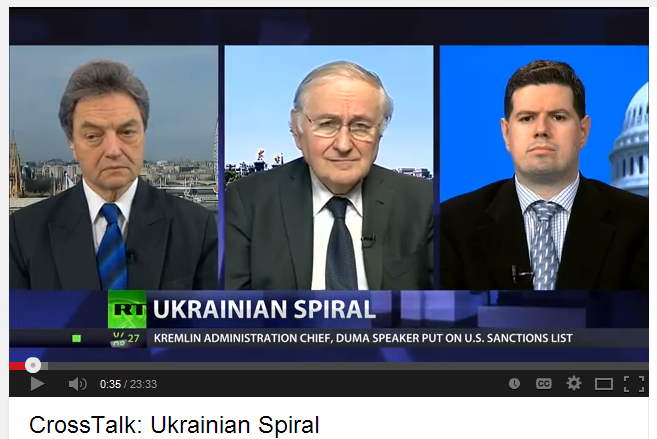 You can watch the show on RT, or on YouTube.

Meanwhile, reporters from TruthDig dug up an interesting revelation: RT anchor Liz Wahl's public meltdown earlier this month was orchestrated by the neocon war lobby. The stunt was run by none other than Jamie Kirchick, the neocon operative who tried to smear Ron Paul as racist and anti-Semitic a few years back. Kirchick and Wahl tried to dismiss the story via Twitter, but it didn't quite work out the way they intended...

And over on CNN, Stephen Cohen schooled Christiane Amanpour on Russia. A joy to watch.
Posted by CubuCoko at 12:33

It was fairly obvious Liz did not write the script she was reading in the studio. And as she soon started denouncing her opponents as "anti-American and anti-Semitic," it became clear who turned her into cannon fodder.