RT's CrossTalk is a show noted for vigorous debate. I've been a guest several times over the past few years, more often as the minority opinion than not. 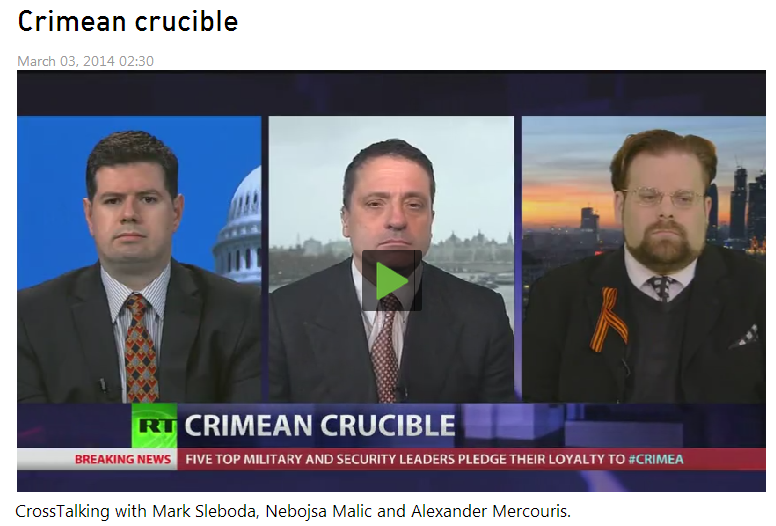 Yesterday, I taped a special edition of the show, where the guests (in addition to yours truly, Mark Sleboda and Alexander Mercouris were tuning in from Moscow and London, respectively) and the moderator weren't arguing with each other, but with the absolute madness of warmongering mendacity in the rest of the English-language media (see here for a good analysis of some examples).

The only reason we were commenting on John Kerry's inane "19th century" quip (he must have been thinking of the Crimean War) instead of the remark that ought to accompany the dictionary entry for "hypocrisy" is that we were recording the show as he was saying this:


“You just don’t invade another country on phony pretext in order to assert your interests.”

That's right, one shouldn't. So, Mr. Kerry, why has your country invaded Serbia, Afghanistan, Iraq and Libya on phony pretexts? And if funding "color revolutionaries" and hand-picking new Prime Ministers in intercepted phone calls isn't meddling in other countries' internal affairs and violating their sovereignty, then pray tell what is? That, in fact, is the point Vladimir Putin has been making for years.

Invade the world; invite the world; break the law and lie about it; ally with Nazis - you name it, the Imperial government has done it. Are we still talking about rational actors, or the lunatics running the asylum?

Clowns like Kerry would be funny if they didnt visit misery upon millions of people the world over. Give them a chance to run their mouths just a short while, and their own words condemn them every time.

I wonder if mainstream media will mention this breaking news story...