It is generally a good thing to be mindful of Godwin's Law in political discussion, though I haven't noticed it stopping many people of describing those they disagree with as "fascist" or "racist" even if they stop short of Nazi (without even knowing what any those words mean). But what happens in instances where one is dealing with, well, actual Nazis? People parading in SS uniforms, giving Nazi salutes, using Nazi language, and generally bring back the "glory days" of the "thousand-year Reich" (actual duration: 12 years)?

Yesterday, my friend Nikola Tanasic tweeted this cartoon:
with the following comment: "The EU is showing once again where it got the notion of the 'great European family of nations'."

He is referring to a German propaganda poster from WW2, describing "What will happen once National-Socialism triumphs". It was featured in a 2002 study, "German Propaganda Posters in Serbia, 1941-1944" (Немачки ратни плакат у Србији, 1941-44) by historian Kosta Nikolic. Here is a low-resolution picture of the poster in question: 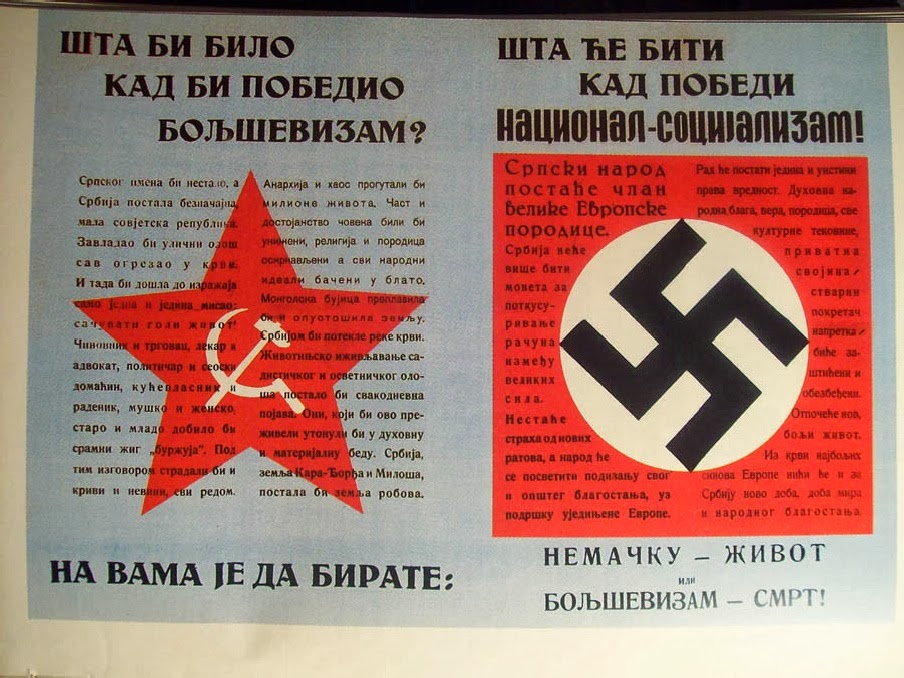 If you read Serbian, you can take a look at a slightly higher-resolution picture here, in the scanned version of the book (see page 102). There are other posters with similar rhetoric - on pages 41 and 46, respectively.

Here is the translation of the text on the right, extolling the Nazi new world:

The Serbian people will become a member of the great European family. Serbia will no longer be the petty change, to be used in bargains between world powers. There will be no fear of future wars, and the people will devote themselves to their own and general well-being, supported by the united Europe. Labor will become the only true value. Spiritual heritage, faith, family, all the cultural heritage and private property - the real engine of prosperity - will be protected and secured. A new, better life will begin. In the blood of Europe's finest sons, a new era will dawn for Serbia as well - an era of peace and prosperity for the people.

Lest one be tempted to nod along with some of these arguments, remember that as they were preaching this, the Germans were sponsoring a genocide of Serbs in "Independent State of Croatia," and executing 100 Serb civilian hostages for every one of their soldiers killed (and 50 for every wounded) in battles against the Serb freedom fighters.

Is it surprising that the EU would use Nazi propaganda imagery and phrases? It really shouldn't be.
Posted by CubuCoko at 18:21

The idea to break up Yugoslavia and create a block of eastern European countries, with a sizable Roman Catholic population (including Ukraine), as a counter balance against Germany and Russia, and breakup of Russia into toothless states, comes from an old Polish plan named Intermarium and Promethean respectively.

Hitler hijacked the plan, following WW2, the CIA, MI6 and Vatican reorganized it into a fascist anti-communist block.

The plan never went away after the collapse of communism:
http://serbianna.com/analysis/archives/2574?utm_source=feedburner&utm_medium=feed&utm_campaign=Feed%3A+SerbiannaAnalysis+%28Serbianna+Analysis%29

They have woken the Russian Bear out of his hibernation...now they are shit scared...LOL

Dodik should now invite Russian special forces, without emblems, on the territory of Republic of Srpska ;-)

GF, spot on. One should be blind not to see the vast similarities between Nazi europe and EU.